Wolfgang Haken: A Collection of Articles in His Honor 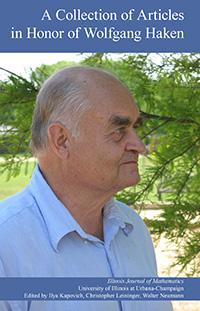 Wolfgang Haken first became known for his 1961 solution of the Unknot Problem. His work profoundly
influenced the field of 3-manifold topology. He significantly advanced the theory of “normal
surfaces,” developed crucial hierarchy techniques, and introduced the fundamental notion that came
to be called a Haken 3-manifold. The Virtual Haken Conjecture, recently solved by Agol and Wise,
remained a major open problem in the subject for several decades.

Haken’s most famous mathematical achievement is his solution in 1976–1977, joint with Ken Appel, of
the Four Color Problem in graph theory. The Appel-Haken theorem was the first major mathematical
result with a computer-aided proof. In 1979, Haken and Appel shared the Fulkerson Prize from the American Mathematical Society.

This stand-alone issue was also published simultaneously as Volume 60, Number 1, of the Illinois Journal of Mathematics. The electronic version of the articles is available to IJM subscribers at Project Euclid.

The volume may be purchased for $35 from the Illinois Journal of Mathematics. Please email ijm@math.uiuc.edu to order. Payment must be by check drawn on a U.S. bank. There is a $32 surcharge for postage outside of North America.