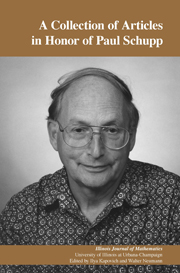 A Collection of Articles in Honor of Paul Schupp

Paul E. Schupp (born March 12, 1937) is an iconic figure in Geometric Group Theory. His contributions to the subject, from his early work on small cancellation groups in the 1960s to his results on interaction between Group Theory and Computer Science in the 1980s to his recent work on generic-case complexity and genericity in Group Theory, helped shape the birth and development of Geometric Group Theory and his name is deservedly among the most recognizable ones in the subject. The classic 1977 book of Lyndon and Schupp, Combinatorial Group Theory, remains  an important and widely influential text to this day.

Paul Schupp spent most of his mathematical career at the University of Illinois at Urbana-Champaign: he joined the Department of Mathematics in 1968 as an Assistant Professor, two years after obtaining his PhD, and retired at the rank of Full Professor in 2008. Now, as a Professor Emeritus, Paul remains an active member of the department. The present special volume of the Illinois Journal of Mathematics honors the mathematical contributions of Paul Schupp. This issue was originally published as  Volume 54, Number 1 (Spring 2010) of the Illinois Journal of Mathematics.

The volume can be purchased online for $30 per copy from the Illinois Journal of Mathematics or by contacting the IJM. For orders from outside North America, please add $5 per copy to cover postage. (There is no postage surcharge for orders from the U.S., Canada, and Mexico.)