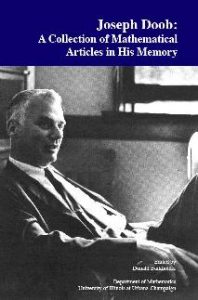 Joseph Doob: A Collection of Mathematical Articles in His Memory

Department of Mathematics
University of Illinois at Urbana-Champaign

Joseph Doob (1910 – 2004) was the leading American mathematician working in the area of probability theory during the 1930s and 1940s. During those two decades and the three decades that followed, he made major contributions to ergodic theory, potential theory, the foundations of probability theory, Markov process theory, martingale theory, and complex function theory. He has had a profound influence on the work of many others.

This volume contains 31 invited papers written by experts in probability, analysis, and allied areas. It reflects some of Doob’s influence and exhibits some of the exciting activity at the frontiers of probability and related fields today.

This volume has also been published, under a different cover, as Volume 50 of the Illinois Journal of Mathematics. To reach a wider audience, it is being made available for purchase at nominal cost as a standalone volume.

The Doob Volume is distributed by the Institute of Mathematical Statistics; it be ordered from the IMS either online using the IMS secure online order form or by fax using the IMS pdf order form.

Alternatively, the volume can be purchased directly from the Illinois Journal of Mathematics using this Doob Volume Order Form.